ad*   What’s not to like about drinks with friends, hearty food and cosy fireplaces?

The Chilworth Arms is a real winter warmer, the place you could easily while away a Sunday afternoon after a long walk in the countryside.

With the festivities upon us, the nights drawing in and temperatures dropping – the restaurant and pub is a welcome escape capturing a slice of that seasonal magic.

Recently I was invited to try its new festive menu, take a look at what I dishes I tried and a peek at the interior…

Just off the A27, close to the M27 or M3, The Chilworth Arms is at the very top of Southampton and very easily accessible by car or taxi.

I quite like that it’s out of the city centre and that it’s in quite leafy surroundings.

Inside The Chilworth Arms

The Chilworth Arms is the definition of cosy, it’s all those fireplaces, I counted at least three! It’s split into two halves really, one half a lovely area for drinks and the other a beautiful restaurant. 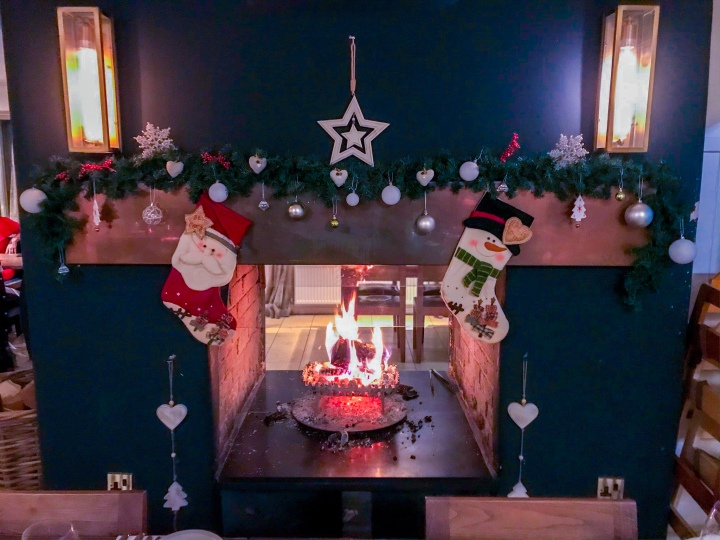 In fact it gave me all The Holiday feels, you know the film. It’s a Christmas classic with Jude Law, Cameron Diaz, Kate Winslet and Jack Black – if you haven’t see it, it’s the piece of Christmas cheese you’ve been missing.

I watch it every year, a ritual that’s turned into a religious Christmas experience. I have the same relationship with Love Actually, which also gets watched at this time of year.

Anyway, before I lose you too far down the inner working of my brain, I better explain what I mean. There’s a bit in The Holiday where Cameron Diaz surprises Jude Law by turning up at his local pub. This, in my head is the pub, it has that same feeling I get from that scene in the movie. Don’t ask my why, that’s just how I felt!

There’s a lovely atmosphere to this pub, it has a finesse making it feel a bit fancier but not uncomfortably so.

I saw a couple of people on dates there, it’s a lovely place for a date!

You know you’ve found a place that you can get on with when Alexander McQueen is on the shelf and you already own the Vogue book next to it. 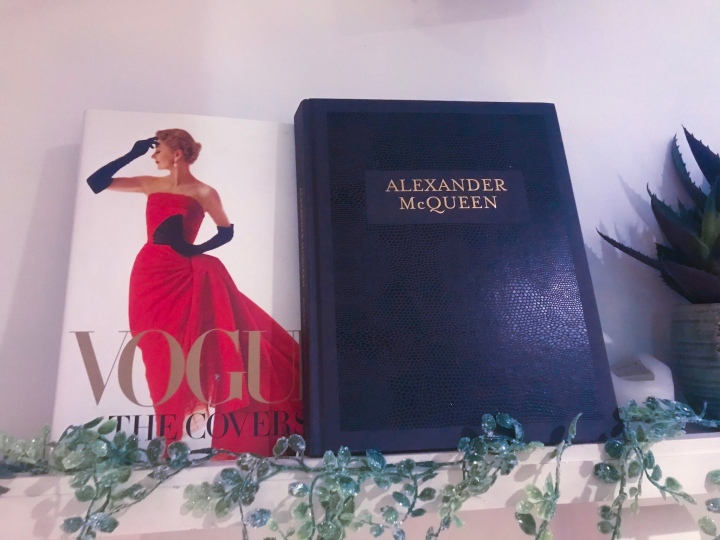 Plus, let’s not forget the pub is all dressed up for Christmas and looking rather splendid… 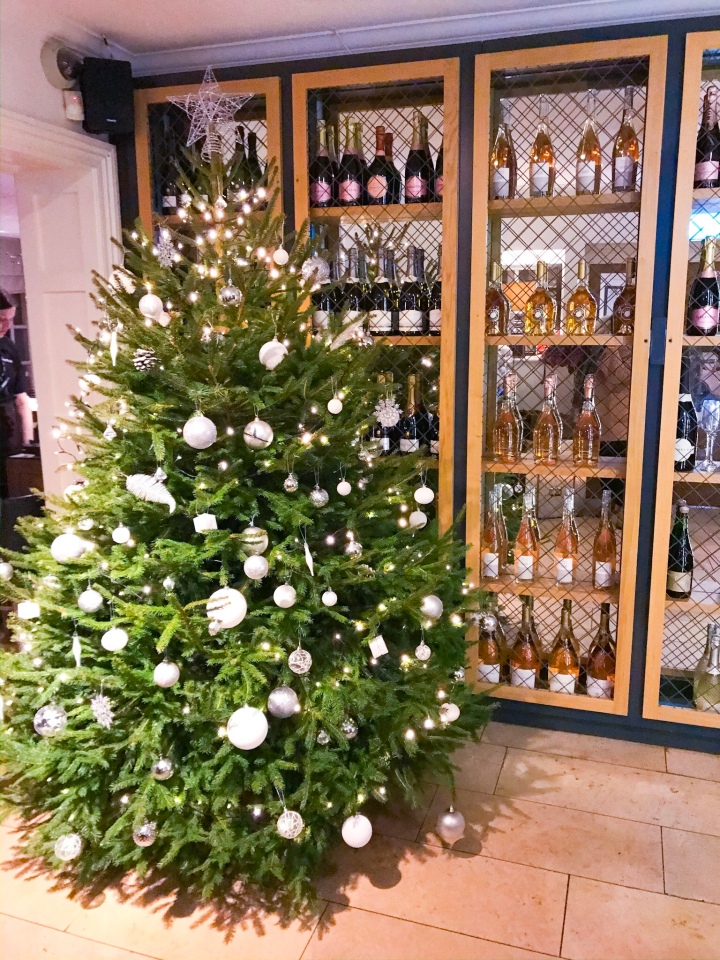 I am really in the mood for a few Christmas cocktails this year, normally I tend to keep drinking to a minimum until the main event. But, this year I’m definitely feeling a change of heart.

Within minutes of being welcomed through the door the lovely team had a cocktail in my hand, and I am all for great hospitality like this.

I had the Sipsmith Spiced Bramble Royale, a gloriously rich red looking drink served in a long champagne glass. The drink was a mixture of Sipsmith’s spiced bramble gin and Prosecco – seriously sensational!

Henry had the Spiced Mojito, a twist on the classic adding Fever-Tree ginger beer, apple juice and a winter spiced syrup to Bacardi spiced rum. Mint and lime finish this cocktail off and it’s a delicious thirst quencher with a wonderful ginger kick.

There’s plenty of other drinks I could have made my way through and some mocktails for the drivers. I had to swiftly move onto mocktails as I had a nasty cold when I visited and can highly recommend the Elderflower Sherbert served in a large gin copa glass.

A lovely little are had been set aside for us and I even got to see my blogging friend Charlotte, which was a great surprise.

The team at The Chilworth Arms treated me to a full three course dinner from their new menu.

If you’re looking at going, three courses start from £27.95 and scale upwards depending on which menu you pick from – classic, indulgent or extra special. Great for family gatherings, Christmas parties or just a cheeky couple of wines over dinner with your friends on a Friday night!

If you’re a regular reader of this blog you’ll know I’m rather partial to a bit of seafood. This increases over the festive season as I find that when you’re dining out a lot sometimes a nice piece of salmon is filling and a refreshing change of pace to other meaty options.

Don’t get me wrong I love a steak and I wouldn’t be without my turkey dinner but when you’re at a few engagements it’s nice to mix it up a bit.

The Chilworth Arms has a lovely mix of starters and it was hard to pick between the scallops, smoked salmon and classic baked camembert. 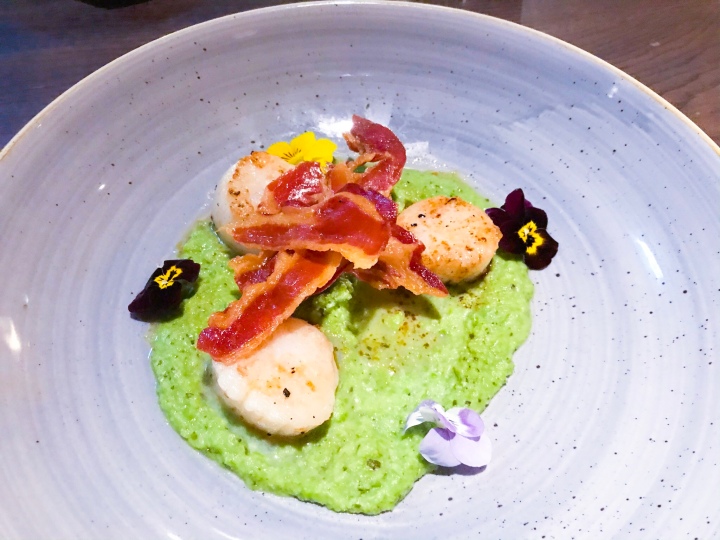 Henry went for the bacon and scallops which were severed on a bed of pureed minty peas, he let me try a bite and the minty peas were a thoughtful addition to the classic bacon and scallop flavour combination. This is a lovely light starter packed full of flavour.

I went for the smoked salmon and king prawn pot topped with crab creme fraiche which had some crispy crostini on the side – absolutely delightful. 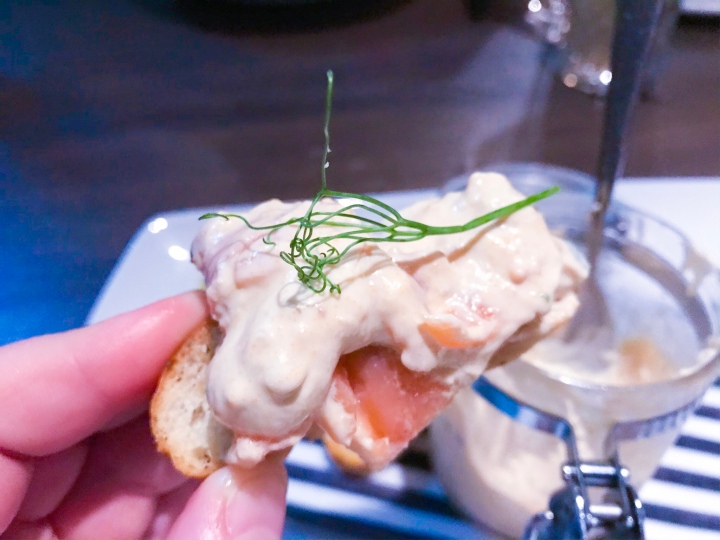 I could have done with one or two more crostini so I could gobble up everything in the pot but, other than that it was spot on!

Henry decided to go for a classic Christmas turkey dinner, and I don’t blame him! It was served up beautifully with a stunning red wine gravy which was heavenly, bread sauce and a huge dish of vegetables and potatoes. 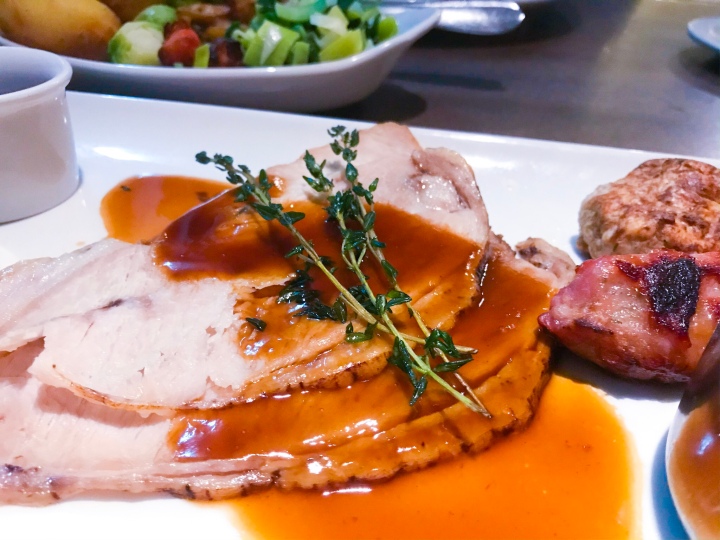 As I said earlier when multiple Christmas meals are on the agenda I like to break things up with some seafood dishes. 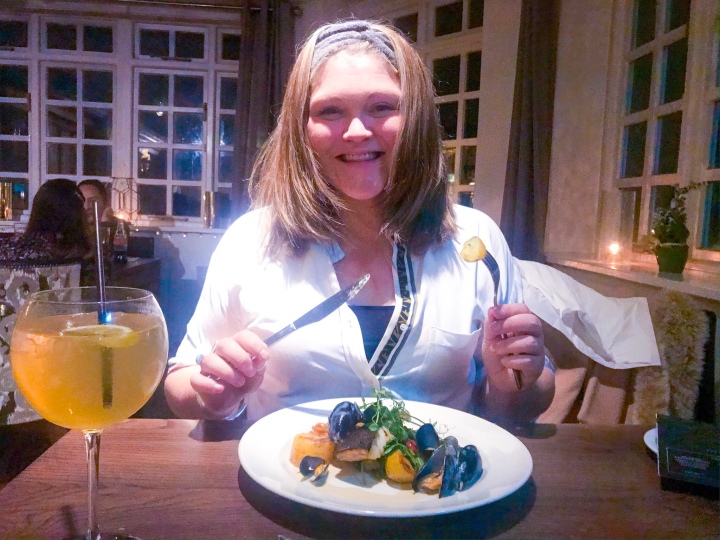 My main course was the salmon fillet which has a very crispy skin (I love that!), new potatoes, samphire and a light creamy mussel sauce. 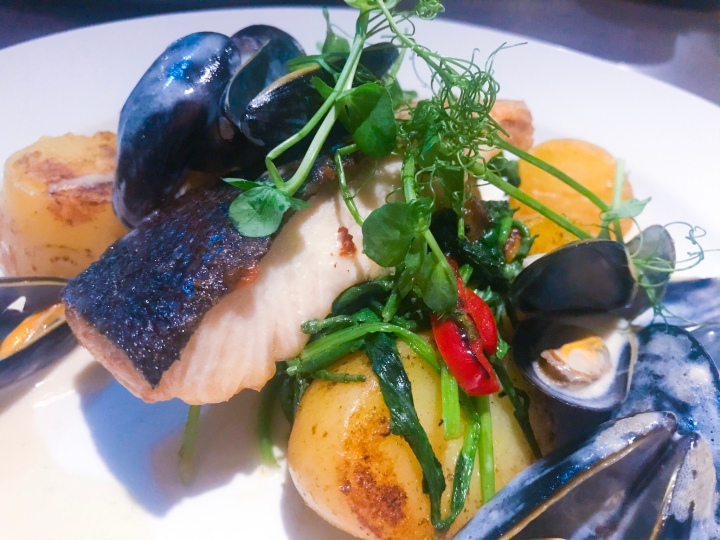 I love samphire and this was a nice touch with the salmon and potatoes giving it a little salty kick. 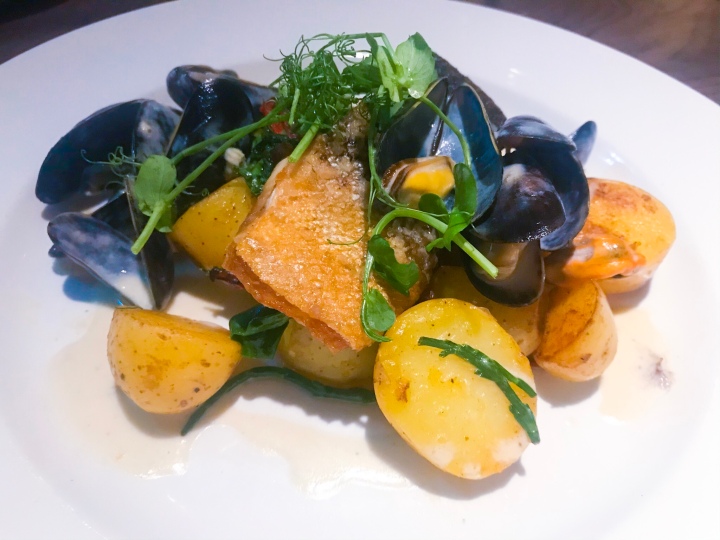 Of course the highlight of long festive dinners is that you indulge a little and take a bit longer over your meal.

The chocolate brownie with honeycomb ice cream was Henry’s choice and I opted for the cheese board, because Christmas isn’t Christmas without cheese, am I right? 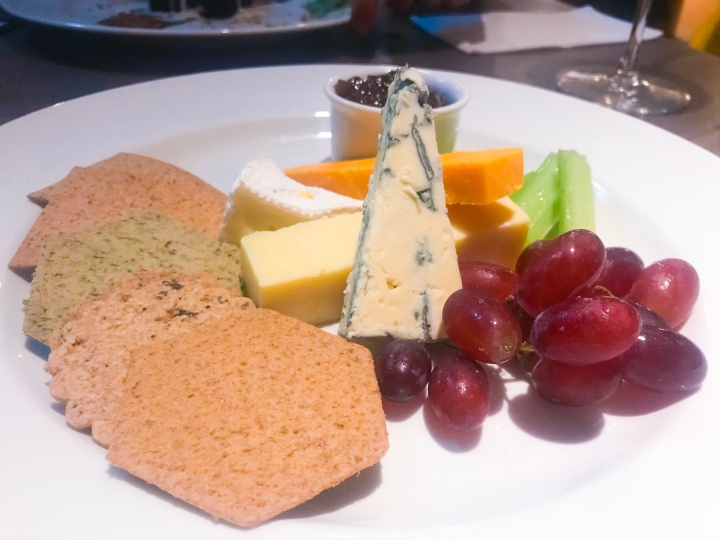 It was a classic cheese selection, it had a little bit of everything and was simple and I’m not mad about it. When you’ve had lots of fancy food something a bit plainer isn’t a bad thing.

I think on this occasion my eyes were a little bigger than my belly as I was incredibly full! This worked out very well for Henry as he had his pudding and most of mine. 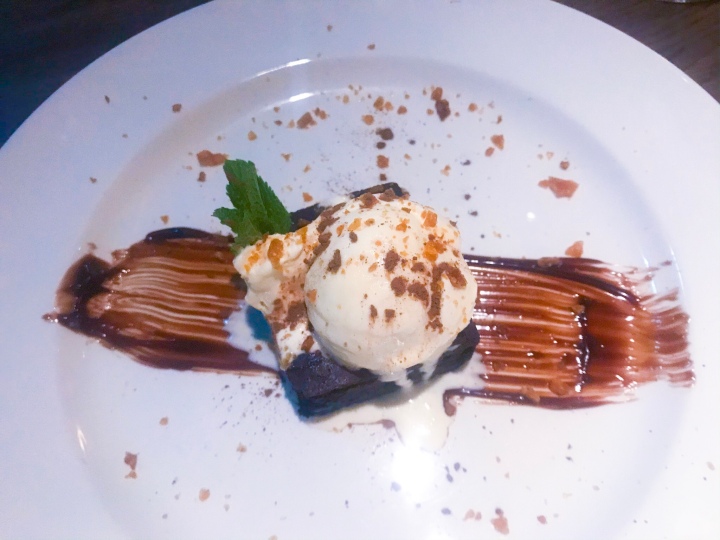 A brownie isn’t Henry’s usual pick but, he said it was good, and I quote…

The brownie is headed towards being a truffle, it’s got that gooey consistency but, it’s stopped at just the right place. It knows its limits, it knows where the line is, without becoming too rich and overwhelming. It’s just right.

A brownie that knows where to draw the line. 😂😂😂 High praise indeed!

What a great little menu and what a cracking venue, I’m 100 percent going back for mulled wine by the fire.

A big thank you to the team at The Chilworth Arms for a lovely evening and a festive meal.

*AD – BUT, all opinions are my own otherwise what’s the point!

One thought on “Dinner at The Chilworth Arms in Southampton”

This site uses Akismet to reduce spam. Learn how your comment data is processed.

Welcome to Bright Lights Big City!
Hi I’m Bex, I live in a beautiful county called Hampshire on the South Coast of the UK. The county is famous for growing watercress, its maritime history and being Jane Austen’s home.

If day trips and big eats are your thing, you’ve landed in the right place. I’ll be sharing my travels, great places to eat and as many different and unique experiences as I can with you through this blog.

Take a look around to see what I’ve been up to lately. All my posts are under ‘Home’ but head to ‘Start Here’ if you’re new here.

Don’t forget you can also search by location under ‘Destination’.